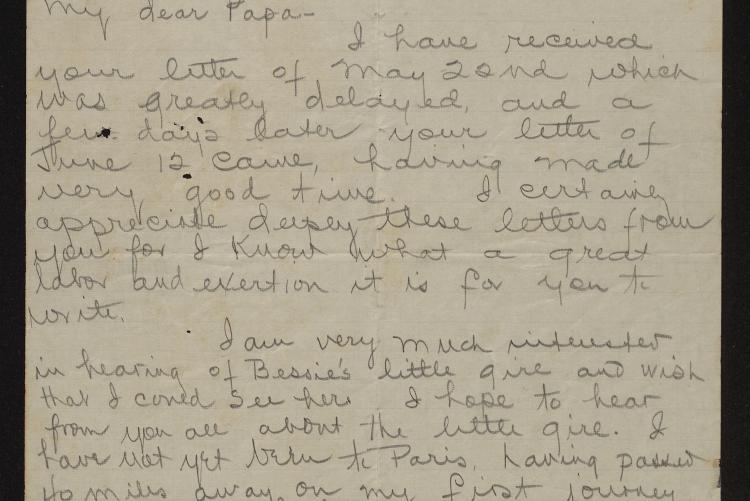 I have received your letter of May 22nd which was greatly delayed and a few days later your letter of June 12 came having made very good time.  I certainly appreciate deeply these letters from you for I know what a great labor and exertion it is for you to write.

I am very much interested in hearing of Bessie’s2 little girl3 and wish that I could see her.  I hope to hear from you all about the little girl.  I have not yet been to Paris having passed 40 miles away on my first journey after landing.  I do not see any chance to get there soon but of course shall certainly make a visit at the very first opportunity.  Paris is the very heart of France – all the people in France are passionately fond of it and even tho you find them who have never been there, the mention of the name brings forth exclamations.  Way up near the Swiss border many hundred of miles away, the people love it as much as those living nearer.

We are being paid in French money in cash4 by the government so we have no trouble about having checks cashed or American money changed.

I have never in all my life experienced such a busy life as I have since being here.  No other experience I have had so far in the army or anywhere else can begin to compare with it.  All day long and most of the night we are busy, very busy.  I hope this schedule will let up some soon and give us a rest tho I am in perfect health and believe I can stand it [illegible] others do.  We do have Sundays off and get a little recreation in a nearby town of about 50,000.5  I am sending a picture of a very attractive French girl I have met over there.  All the week however, we have absolutely no time off.  I shall write you as often as possible and tell you how I am getting on.  While this part of France6 is not as attractive as it was way to the east, still it is wonderful to me and my regret is that I do not get the opportunity to see more of these people.  I certainly trust that you are about as usual.  It seems hard to realize that it is now very hot at home.  Here it is rather warm some days in the middle of the day but I sleep every night under from 4 to 6 blankets.  As I understand it really all of France has such weather.

Please write to me as often as you can and get the others to write.  A letter over here is a great event to us.

Rennes, France; although Dixon underestimated the population by about 50,000.  The regimental historian gave the following description of the city,

Rennes is a beautiful old town of about 100,000 people. It is the chief city of Brittany, and was the old capital of Brittany before the provinces were united to form the kingdom of France. There were good hotels and restaurants, amusements of various kinds, one of the most wonderful city parks in the world, the "Jardin des Plantes," a museum worth crossing the ocean to explore and many other things distinctly worth while. The people of Rennes were kind and hospitable, and much interested in American soldiers. Officers and men, the One Hundred and
Thirteenth Field Artillery loved Rennes and never missed an opportunity of going there.

this part of France6

The French region of Brittany.