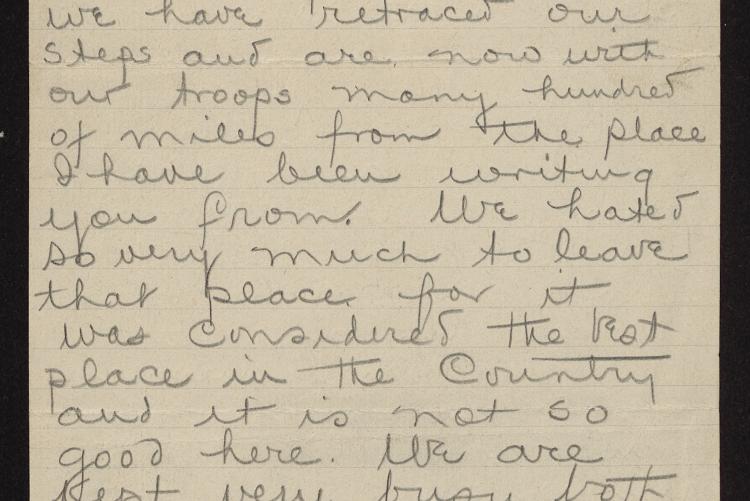 After several days on the train we have retraced our steps and are now with our troops many hundreds of miles from the place I have been writing you from.2  We hated so very much to leave that place for it was considered the best place in the country and it is not so good here.  We are kept very busy both going to school and training the men.  It was quite a disappointment to us to leave that place but of course we are glad to get back with our troops.  We had several stop-overs on our way here and therefore got the opportunity to see several very large French cities.

A week or so before we left, Rodman Guion3 and I met a French major who was touring thru that part of the county on military business in a great big limousine and he invited us to go with him.  As it was Saturday afternoon and nothing to do we accepted and went to a town where we spent Sunday returning Sunday night.  It was a very beautiful ride thru the prettiest part of France.  While in this town we met 8 officers of the 6th Battalion Chasseurs (infantry)4 who were on leave and enjoyed our day with these alpines.  They gave us a dinner as you will notice from the menu enclosed and also wrote their names on the back of the card.  These Alpine Chasseurs4 are the best infantry in France.  The Swiss and also the Italian Alpine Chasseurs5 are also famous.  I am hoping to get a letter form you all very soon as I have received only one from you since landing and that one was dated May 6th and forwarded from the port of embarkation.

I am sending Mary Beverly6 several copies of the American Army newspaper published over here which I hope you all will enjoy.

The French soldiers from the front whom I have talked to praise the Americans very much.  There are now 800,000 over here and more are coming regularly and with their dash and bravery I do not expect the worn out German soldiers to be anything like their equals.

I hope that you are as well as usual.  I think about you so much and would like to be with you.  Please do not worry about me for I am in absolutely no danger and will not be for quite awhile.  I hope that you all will write as often as you can.

the place I have been writing you from.2

Camp du Valdahon.  A French military camp, near the Swiss border, created in 1907 as an artillery training facility.  The US Army’s Field Artillery School operated there during World War I.  Video containing period images of Camp du Valdahon during the Great War (in French), link:  https://youtu.be/xq6bgmwAEng.

French mountain troops, Bataillons de Chasseurs Alpins, literally “battalions of Alpine hunters.”  Formed in 1888 as a response to Italian mountain troops stationed on the French-Italian border following the unification of Italy.  At the time Dixon met the French officers, the 6th Battalion was on the Somme, participating in the Summer 1918 Allied counteroffensive.  The French Army disbanded this battalion in 1994.