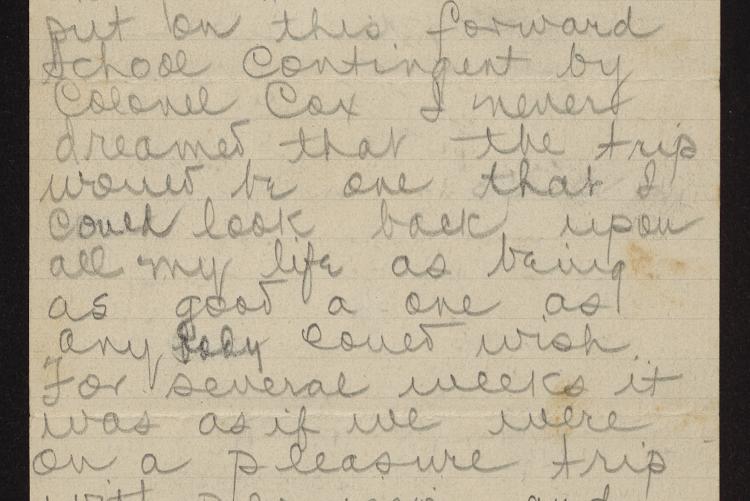 A letter from Richard Dillard Dixon to his family during WWI.

When I was fortunate and lucky enough to have been put on this forward school contingent2 by Colonel Cox3 I never dreamed that the trip would be one that I could look back upon all my life as being as good a one as anybody could wish for several weeks it was as if we were on a pleasure trip with permission and privilege to go and come as we please.  Of course this was made possible because we had no troops to look out for.  It is needless to say that I have taken full advantage of it as I had been cooped up so long in that quiet and boring locality around camp.

I have always been strong for the “go” and “push” of the outside world and I have had it to my heart’s content.  And in addition to my natural desired along this line I have been a soldier long enough to have learned “to take my fun where I’ve found it.”

Since arriving here, however, I have attempted to address myself as closely as I could to the work at hand for all of us realize that we have a man’s job to perform and therefore must master thoroughly the knowledge of the art of war in order to “acquit ourselves like men” when we are called upon.

For the first few days I became very much discouraged as I was beginning to think that I was not going to master these things so thoroughly – so quickly did these French officers shout this strange and unfamiliar stuff at us but I am now beginning to feel that I am absorbing some of it and possibly after a while will make a fair student.  But it is hard, very hard—it is all so different from ours—all these maps, plotting boards and other geographical and geodetic appurtenances and apparatus are things I have never known anything about,

I have many dozens of time wished that you could enjoy this country with me.  It is now just in the middle of spring and the landscape is something wonderful.  There are no wooden fences in France.  But along the hard, white roads are dirt or stone embankments about 4 feet high and 3 feet thick, hundreds and hundreds of years old.  These are of course covered with verdure and all along their lower edges there are millions of the daintiest little wild flowers of all kinds.  Great red poppies live either side of the roadway and in most cases giant Lombardy poplars4 in even straight lines are between the road itself and the hedgerows.

Every day the little French boy who waits on our table picks several vases of these little wild flowers for us.  They love flowers and everywhere you go you find flowers of some kind on the table.  It seems to up a privilege to so our part towards saving this beautiful country for these beautiful people.

It is very nice to be able to say that the Americans have made a great hit with the French.  A khaki uniform is all the recommendation needed.  The appear astounded at the great amount of money the Americans have and the lavish way they spent it.  Of course you know that normally things here are on a much lower basis than at home—in fact a franc or 20₵ went as far as our dollars and they marvel at the ease with which we spend 5 or 6 franc for a dinner, (which before the war was probably 2 francs) and appear so satisfied.

I have found very few important things over here higher than in America—for instance shoes and all leather goods are probably ⅓ higher and not as good as ours so I was fortunate in having brought enough of footwear to last a long time but clothes are some cheaper than at home and appear to be of better quality.  Of course the prices and conditions I have mentions refer to the parts of the country not immediately near the war areas.  The government has provided for our comfort in bringing over necessities that the French do not have—for instance all kinds of smoking and chewing tobacco, razor-blades, & toilet articles can be bought right in the camp from the commissary for ½ the price we pay in America.

Of course we do not know how long we will remain here but I am quite sure that as long as we are in the army in France we will not be so pleasantly situated.  When we rejoin our regiment we will be billeted in small villages—probably one or 200 men in a town and there it will not be so luxurious for unfortunately the custom in these little country villages is that the family – the horse, the cow, chickens and goats all live under one roof.  Of course there is a wall, however, between the people and the animals.  If by chance we officers can be assigned to the home of some well-to-do people we will not have to become so intimate with animal and insect life.

It was very nice to have received yesterday two letters from home—the first since reaching this side.  One was from Uncle Dick5 that was dated April 27 and originally was sent to camp,6 then to the port of embarkation7 and forwarded to me over here.  Please thank him for Mrs. Little’s address.  I will certainly keep it and look her up if I should go there.  The other letter was from Papa8 dated May 6 and forwarded from N.J.   While these letters have been written sometime, nevertheless I was so glad to get them.

I hope that everything at home is about as usual.  I think so often of you and wish that I could be there with you all but I am quite sure that you would rather have me take a part (however small) in this great enterprise upon which our country has embarked.  I cannot help but feel that you would rather have me really in France than just merely in uniform.  America is going to win this war.  Already hundreds and hundreds of thousands of soldiers in khaki are in France and they continue to pour in.  It will take hundreds and hundreds of thousands more to join these and it will require some months to get them over here but when our entire army has been completed and prepared can the war-worn troops of Germany stop these business-like and ambitious young men?  They are over here to finish up the war and to get back home to their people and business and when everything is ready and they are given the word it will be all over.  But it will take hundreds and hundreds of thousands and many many weeks, and probably month before that time comes.

Please write to me often and also see about having the Albemarle Observer9 sent to me also the Norfolk paper10 for awhile.  It is a great help to receive a card or even a paper from America.

Another name for the “advance school detachment.”  According to the regimental history,

The New York Port of Embarkation, a military command responsible for transporting men and materiel to Europe, used several facilities spread throughout the greater Port of New York.  The principal station lay at the impounded docks of the German-owned Hamburg America Line in Hoboken, New Jersey.

The Virginian-Pilot newspaper.  Formed in 1898 from the merger of the Virginian and the New Daily Pilot.  Published daily in Norfolk, Virginia.  Edited by William E. Cameron, a notable Democratic politician that started his political career as a Republican.