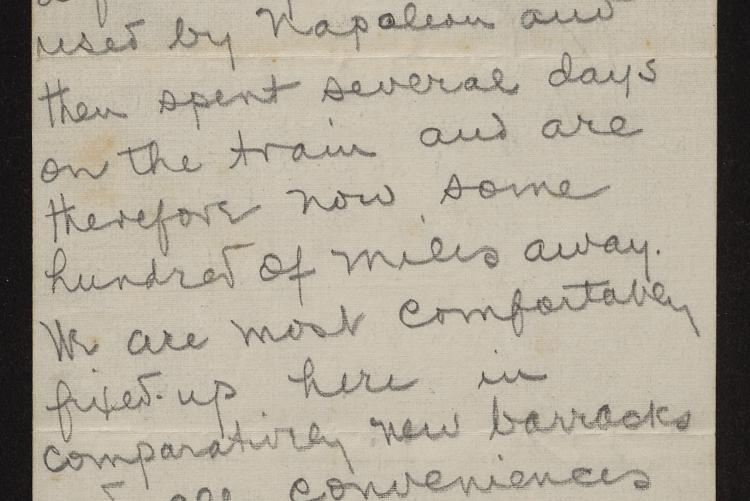 I hope you received my wire announcing my safe arrival.2  We remained at a rest camp a few days in barracks used by Napoleon3 and then spent several days on the train and are therefore now some hundred miles away.  We are most comfortably fixed-up here in comparatively new barracks and all conveniences and will probably remain here a few months.4  The food we get here is the best I have ever gotten in a military organization—in fact I have gotten nothing but most excellent food from the very start.  When we have visited the towns near here and at the stations enroute we have no difficulty in purchasing all the good things to eat we desired and cooked in the most delicious style I ever tasted.

With my limited vocabulary, it will be impossible to convey to you correctly the big impression this country and its people has made upon me—one endless panorama thru the entire country of beautiful vineyard-covered green hills, beautiful valleys and streams.  Everything is built of stone and an artistic touch is given to everything—even the smallest bridge spanning some silvery brook is built in a way unknown to America.  And the people here—everybody busily employed in doing something—no loafing and hanging around.  The very air keeps one on the move and to be glad to be alive.  They are the most polite people I have ever seen always ready to do something for us and so profuse in their thanks to us for even the very smallest favor done them.  I suppose it will be unnecessary to mention how beautiful the girls are and how beautiful the language is and how charmingly the girls talk it.  When I see several of them together I cannot help stopping and listening to it.

I have been enjoying very much trying to learn the language but so far have not be able to carry on much of a conversation—merely to buy what I want or to ask the way to some street or store or things of that sort.  To sum up my personal feeling about myself and surroundings I can say that it would be impossible for me to have gotten along better so far or to be more comfortably cared for than at present.  It is a great education the government is giving us.

I have thought of you many hundreds of times since starting on this trip and am of course greatly grieved that the necessities of the times take me so far away from you but I am quite certain you would many thousand times rather say “I have a son in France,” than “my son has a nice governmental position in Washington.”

I hope you will pardon my having written at such great length of things that are of no very great importance in connection with this serious matter of winning the war, but of course nothing military can be written back home.5

I suppose you might think that from the tone of my letter that I consider myself on a pleasure trip with no work to do.  Of course during the trip there was nothing to do in a military way but classes have now started and it will be work and study hard from now on.6

I hope that all members of the family are getting on all right.  Has Brownie7 gotten definitely located yet?  I got a letter from Mary8 just before learning the other side in which she said that he had joined the marines.

I certainly trust that you are feeling as usual.  I am looking forward even now o returning to you.

Please write me when you can and get the other to write.

Please tell Uncle Dick10 and Mary B.8  That I will write to them soon.  I certainly appreciated Uncle Dick’s coming to see me.11

Love to you all

I hope you received my wire announcing my safe arrival.2

Camp Pontanezen.  French military officials turned over the Pontanezen Barracks near Brest to the United States for use as a disembarkation and assembly point for American troops destined for the Western Front.  Napoleon Bonaparte ordered the construction of the original barracks in 1806.  Image of the Pontanezen Barracks, Library of Congress.  link:  https://www.loc.gov/item/2010648279/.

We are most comfortably fixed-up here in comparatively new barracks and all conveniences and will probably remain here a few months.4

Camp du Valdahon.  A French military camp, near the Swiss border, created in 1907 as an artillery training facility.  The US Army’s Field Artillery School operated there during World War I.  Video containing period images of Camp du Valdahon during the Great War (in French), link:  https://youtu.be/xq6bgmwAEng.

nothing military can be written back home.5

A reference to the military censorship imposed on all outgoing soldier mail.

classes have now started and it will be work and study hard from now on.6

Dixon’s training at Valdahon lasted through the end of June 1918.

Uncle Dick’s coming to see me.11