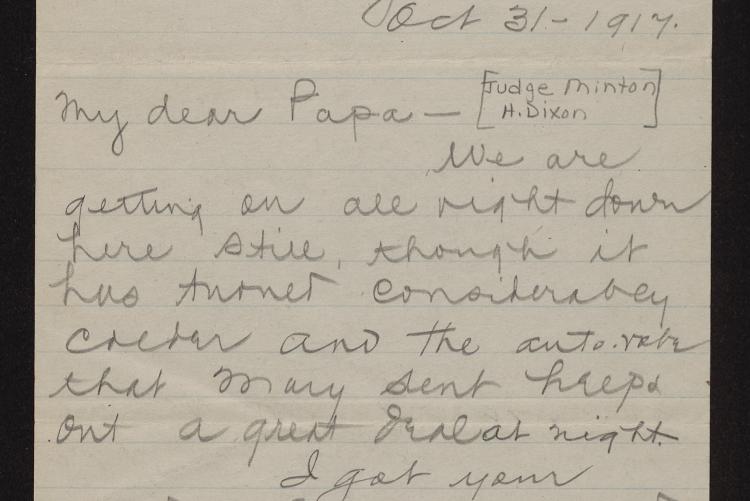 We are getting on all right down here still though it has turned considerably cooler and the auto robe[2] that Mary[3] sent helps out a great deal at night.

I got your card and was so glad to hear from you in your own hand-writing again and hope you will write me a line or so whenever you feel like it.  I appreciate so much your buying and putting away for me the Liberty Bond.[4]  It is a great help to me away from home like this to be thought of in this way.  The Bond will help me out when I get out of the war for I must make a start all over again then.  I enjoy very much the Edenton and Norfolk papers which come regularly.  Brownie[5] came over to see me last night and brought the candy from Mary B.2 cigarettes from Minton[6] and a bottle of wine from Uncle Dick.[7]  Please thank them all for me.  It was too bad than brownie was delayed in getting home and after all didn’t get there for the dance.

All of the officers in this Regiment[8] were given an examination last night by the General.[9]  It was unusually hard and embodies some questions that we hadn’t been over at all.  I do not think I made a very good mark but did as good as the other officers and am quite sure I passed all right.

Lt. Rodman Guion[10] has been sick for 3 weeks with grippe[11] and his Father and Mother came Monday and took him back home to recuperate.  They were afraid that he might have pneumonia as he insisted on going out and working.

I hope Mac[12] made money selling “hot dogs” at the fair.

Brigadier general.  Born in Maine, Gatley graduated from West Point in 1890.  Fought in the Philippine-American War and the Mexican Expedition against Pancho Villa as an artillery officer.  Sent to Camp Sevier as the original commander of the 55th Field Artillery Brigade, which included the 113th Field Artillery.  However, in July 1918, Gatley took command of an artillery brigade in the 42th Division, which he led through the war.  Served in the army until his death in 1931.

Another name for influenza.  Derived from the French term gripper, or “seize.”