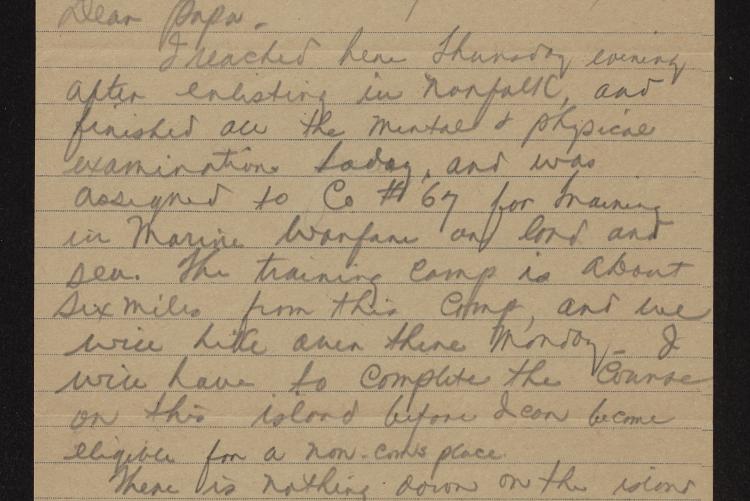 I reached here Thursday evening after enlisting in Norfolk3 and finished all the mental & physical examinations today, and was assigned to Co #67 for training in marine warfare on land and sea.  The training camp is about six miles from this camp, and we will hike over there Monday.  I will have to complete the course on this island before I can become eligible for a non-camp place.

There is nothing down on this island4 except Marine and Naval Camps and you are not permitted to leave the camp until all training is over.

They are working the boys very hard down here but of course it is not hard on me yet, however.  I reckon it will get very hot and hard when I reach the next camp.

My address will be.

P.S.  I will write again as soon as I have time.  My company is composed of a very high type of boys, a much better crowd than I have seen gathered together before for such a purpose.

Don’t know what company Thomas is in but think he is in my battalion.

George Brownrigg Dixon dated this letter April 5, 1917, but the date is a misnomer.  In April 1917, Dixon still worked with his brother Minton at a wholesale grocery in Plymouth, North Carolina.  He did not enlist in the Marine Corps until May 4, 1918.  Exactly why he backdated the letter to April 1917 remains a mystery.

Parris Island, South Carolina.  Although a naval coaling station since the Civil War, beginning in 1915, Parris Island slowly evolved into one of two primary training bases and recruiting depots for the US Marine Corps.  The marine corps initially misspelled the island’s name as Paris, an error not corrected until 1919.  For more information about the facility during World War I, see the entry in the South Carolina Encyclopedia: http://www.scencyclopedia.org/sce/entries/parris-island/