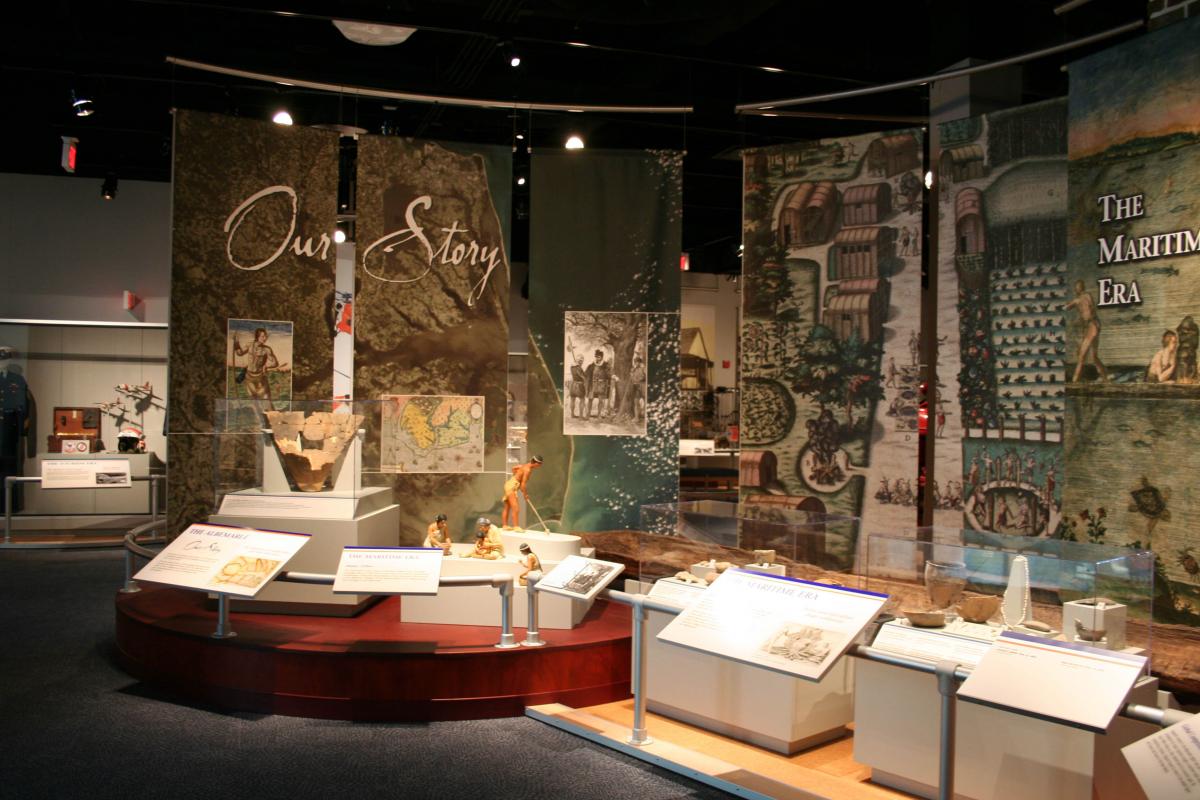 Our Story: Life in the Albemarle

The Albemarle is a unique place—half land, half water. Our ever changing relationship with the water has defined our way of life. Water is both a highway and a barrier, a source of livelihood and inspiration. The story of this place is Our Story, a tale of how our communities have adapted to challenges and opportunities of our unusual home. This is a long-term exhibit with no closing date.

The Official State Historic Boat of North Carolina was first built in the early 1880s by George Washington Creef of Roanoke Island. The shad boat on display here at MOA was built in 1904 by renowned boat builder and decoy carver, Alvirah Wright. This is a long-term exhibit with no closing date.

High on the Hog

The expression “half land, half water” describes the area of northeastern North Carolina. And on that land, hogs have been raised, butchered, and processed for generations. Hogs have found their way into our lives and culture, playing a significant role for families in northeastern North Carolina. Whether a vital source of food and income for regional families or an ingredient in recipes and medicinal and everyday products, hogs are considered cultural icons. The High on the Hog exhibition will look at how pigs have become a part of our family, home, and livelihood.

The year 2020 marks the 100th anniversary of women’s suffrage in America. As institutions across our country commemorate this event, the museum has embraced the North Carolina Department of Natural and Cultural Resources' initiative “She Changed the World.” In our related exhibition, we focus on women of northeastern North Carolina and how their experiences, stories, and challenges have factored in history.

Women have played and always will play an integral part in every aspect of history. By advocating for what they believe and envisioning a different world, these women leave remarkable stories of adversity and hope, with grit, determination, perseverance, and talent that changed the world.

Come explore this exhibit, read the stories, and ponder on how the barriers that these women broke, or helped break, in areas such as women’s suffrage, public service, literature, journalism, activism, religion, entertainment, and more, affect your life today. Some women may not have been the first to break a barrier but played a role in a larger movement that affected the people of our nation. Sometimes a single person standing up for what they believe is right can influence others to make an even bigger difference.

A special component to this exhibition includes artwork by regional high school students. Students in grades 9 through 12 participating in the contest were provided a list of women who made a difference in their county.  The students studied the women and produced artwork showing how they were inspired to recognize women who made a difference in their county.  An overall winner from each county was selected.  Out of the overall county winners an overall winner was selected.  This special component was supported by a grant through The Elizabeth City Foundation.

“Throughout American history, women with diverse backgrounds and interests created inventions that changed lives every day. But women haven’t always had equal opportunities to be inventors or received as much recognition. The Smithsonian and the United States Patent and Trademark Office present “Picturing Women Inventors,” a poster exhibition that explores the inventions of 19 highly accomplished American women. Astronauts, computer pioneers, and businesswomen join athletes, engineers, and even teenagers in this remarkable group of inventors.” The posters will be on view at the Museum of the Albemarle beginning October 22, 2021.

“Picturing Women Inventors” showcases the breakthroughs, motivations, and challenges women encountered while pursuing their goals as inventors. The poster exhibition highlights stories of inventors like Marilyn Hamilton, who after a hang-gliding accident in 1978 left her paralyzed, invented a lightweight wheelchair that was easy to maneuver. Diversity of background and age are showcased including inventor Alexis Lewis, who at 12-years-old in 2011 was inspired to adapt a traditional Native American sled, called a travois, by adding wheels to create a simpler way to transport families and their belongings in Somalia.”

Although not mentioned in this particular exhibit, viewers would be interested to know that Elizabeth City native Nannie W. Hunter received a patent in 1867 for her solution to creating a better smelling soap. Additionally, Raleigh native Beulah Louise Henry (1887-1973) was an extremely creative and talented inventor whose abilities credited her with the nickname “Lady Edison.” After later moving to New York City, she started two companies, received 49 patents, and was credited with over 100 inventions.

“This poster exhibition was designed to educate and inspire young people to see themselves as future inventors. “Picturing Women Inventors” is distributed at no cost to schools, libraries, museums and community organizations by the Smithsonian Institution Traveling Exhibition Service in collaboration with the Lemelson Center for the Study of Invention and Innovation and the United States Patent and Trademark Office. It’s sponsored by Lyda Hill Philanthropies IF/THEN Initiative and Ericsson.

SITES has been sharing the wealth of Smithsonian collections and research programs with millions of people outside Washington, D.C., for more than 65 years. SITES connects Americans to their shared cultural heritage through a wide range of exhibitions about art, science and history, which are shown wherever people live, work and play. For exhibition description and tour schedules, visit www.sites.si.edu.

The Lemelson Center has led the study of invention and innovation at the Smithsonian since 1995. The center’s activities advance scholarship on the history of invention, share stories about inventors and their work and nurture creativity in young people. The center is supported by The Lemelson Foundation and located in the National Museum of American History. For more information, visit www.invention.si.edu.”

Indigenous people have lived in North Carolina for over 15,000 years, long before other groups. Consequently, Indigenous Americans are the “First Americans.” They viewed land as more than dirt or soil; it was part of the culture and history of the people who inhabited it.

Come and visit this children’s exhibit to connect and learn how land has played an important role in the living history of the Indigenous people of coastal northeastern North Carolina. Indigenous American people are still being heard, their stories are being shared, and they are working to help others better understand their lives, cultures, contributions, and histories. Listen to their stories and voices, for they are strong.

Guardians of the Land: Discovering Indigenous Americans remains on view until August 2024.

The Museum of the Albemarle opens its small acquisition case exhibit Reliving the 1970s: Toy Edition on March 18, 2022. A major explosion of toys marked the 1970s with many being highly collectible today. Toy production advances led to the rollout of electronic games and toys such as the Atari 2600 game console, the Simon computer-controlled game, and Texas Instruments’ Speak & Spell. Movies and television shows like STAR WARS and The Six Million Dollar Man created a market for action figures based on the characters.

Enjoy this glimpse into a time where Atari, Baby Alive, Rubik’s Cube, and STAR WARS reigned.

In conjunction with the unveiling of the new North Carolina Highway Historical Marker dedicated to Soybean Processing, the Museum of the Albemarle will place on display in its main lobby a circa 1920 soybean harvester manufactured in Elizabeth City by the Gordon Bean and Pea Harvester Company beginning August 12th. This machine was developed by local inventor LeRoy S. Gordon (1866-1955). Gordon was not the only inventor and manufacturer of soybean harvesters in Elizabeth City, as Church Street resident George Pritchard (1883-1947) also patented his own model in the 1920s as well.  The museum has a model of each.

Enjoy this glimpse into a time where Atari, Baby Alive, Rubik’s Cube, and STAR WARS reigned.

All exhibits are free and open to the public unless otherwise stated.