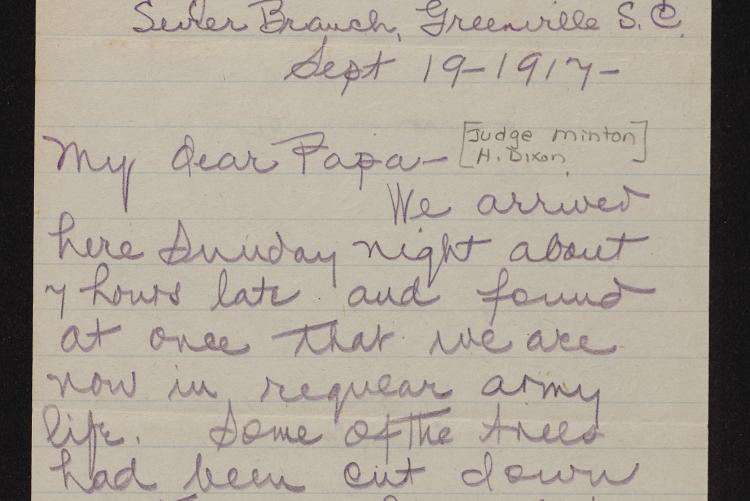 We arrived here Sunday night4 about 7 hours late and found at once that we are now in regular army life.  Some of the trees had been cut down5 and the mess-halls built6 but the balance had to be done by us such as clearing away the camp-site, cutting down trees and digging up stumps.  In other words we we[’re] given a woods and told to clear away everything and make a smooth encampment of it.  We are not yet finished but hope to get things in presentable shape tomorrow.  It has been pretty hard on the men but it is good practice and it will benefit all of us to get used to hardships from the very start.  I expected nothing but hard work in the army and I haven’t been disappointed in my expectations.  I went on duty tonight at 6 as officer of the guard for the Regiment and will be relieved tomorrow evening at 6 so I feel a little responsibility tonight.

We get up at 5 o’clock (pitch dark and very cold) and we find it hard to get the men to “fall in” promptly for revile so we officers have to be up and get them out promptly as it would be very embarrassing if some higher officer caught the battery slow in starting the day’s work.

I haven’t been outside of Camp Sevier7 yet and do not know what kind of a city Greenville S.C.2 is.  There are about 25,000 troops here with more arriving every day and most of them have to cut down the woods as we have done.  The camp had no cleared land at all.

I have seen Brownie8 several times.  His outfit is encamping where some troops have just vacated so his job wasn’t quite as hard as ours.  He is getting on very well and is known by most everyone in his regiment as I asked for about him from dozens of 2nd NC9 boys & they all knew him.  I hope he and I can go to Greenville2 some night soon.  I am having my car brought down here as after I leave here I won’t have the chance to take it with me again.

Personally I have been getting on fine and rather like army life.  It is of course very rough and there are any number of discomforts but I have been feeling fine and I think I can stand what the next man can.

I hope you all are getting on as usual at home.  Write to me when you feel like it & get the others to write.  Tell Uncle Ben that his bottle of wine was a life saver to us officers.  We drank it last Saturday morning after we had gotten soaking wet to the skin in New Bern10 loading our supplies in a driving rain.

Colonel Cox11 said today that he thought we would be here a very short time.  How long I could not find out or whether we would go to France or to some other camp to train in shooting the 3 inch guns.12 There is no artillery range in this camp.  It is hard though to find out anything definite.

Some of the trees had been cut down5 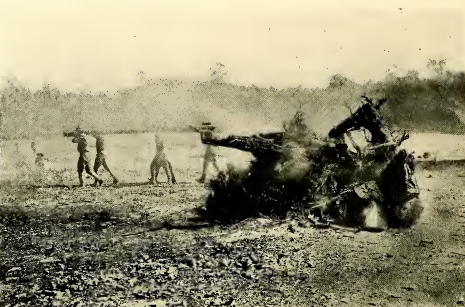 Younger brother of Richard Dillard Dixon.  Attended UNC-Chapel Hill from 1914 to 1916, where he belonged to the Phi Delta Theta fraternity.  Went into the wholesale grocery business with his older brother, Minton Hughes Jr., in Plymouth, North Carolina from 1916 to 1917.  Enlisted in the North Carolina National Guard on May 25, 1917.  Due to his college experience, selected for officer’s training on December 27, 1917.  Commissioned as a 2nd Lieutenant in the 119th Infantry, Dixon resigned for mysterious reasons on March 27, 1918.  About two months later, he reenlisted, this time in the Marine Corps.  After completing basic training at Parris Island, served at the New York Marine Corps Barracks in New York City.  Reached the rank of corporal.  Never left the United States during his military service.  After his discharge from the Marines in February 1919, moved to Suffolk, Virginia to work as a manager for Winborne & Company, a wholesale grocer.  Later became a salesman for the local peanut growers’ association in Norfolk, Virginia.  Ultimately returned to Suffolk, where he worked as the Secretary -Treasurer of the Benthall Machine Company, a firm that manufactured peanut harvesters, until his death.

Example of a 3-inch artillery piece.  Name derived from the diameter of the fired projectile, in this case, three inches.  link: http://www.loc.gov/pictures/resource/ggbain.09380/.  Library of Congress.